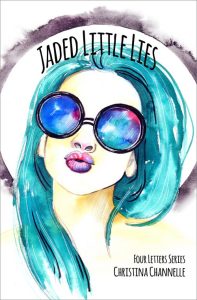 What do you do when the love of your life is halfway across the world?

If you’re Jade Reamer, you fill that void with writing depressing song lyrics, hanging out with asshole exes, and re-reading your dead best friend’s diary (morbid, anyone?). But she’s got a lot to deal with—getting to know her biological family, for one. Not to mention getting through her first year of university without her best friend, Nina, by her side.

Then there are the men in Jade’s life. Her ex, Connor, has baggage coming out of his ass since the car accident. Her brother, Bryn, thinks stifling who he really is while pretending everything’s okay … is okay. When that’s far from the truth. And Reed? Reed decides the best way for Jade to deal with his absence is to get her a dog. And when he finally comes back?

Deciphering between love and hate is the least of Jade’s problems … those four letter words are getting more and more complicated. Especially when she and Reed are keeping secrets from each other. Because as she forms new relationships and rekindles old ones, an unexpected surprise has got Jade’s mouth spewing lies on top of the usual curse words.

Christina Channelle is a blogger who enjoys writing about motivation and all things lifestyle. She’s happily addicted to coffee, being surrounded by nature and the art of decluttering. She’s also partial to quartz crystals and in the not-so-distant past, may have written about angsty girls with a potty mouth.